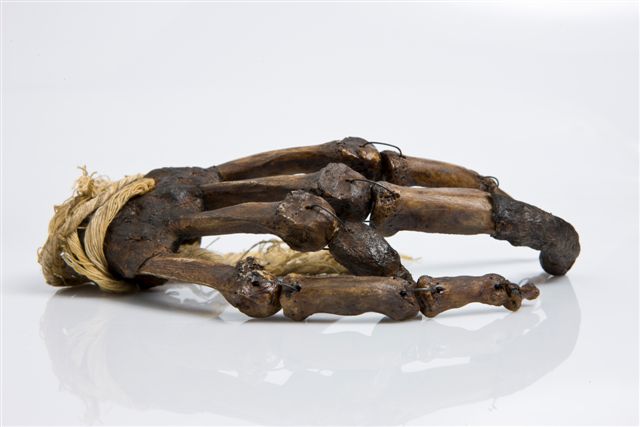 The Yeti is surrounded with mystery and intrigue. During my travels in Nepal around the Everest region I have heard many stories - great stories passed from generation to generation.

One such story involves a monastery in Pangboche, a small village in the Everest region. In the 1950's a Yeti tracker/scientist called Peter Byrne went on an expedition to Nepal. The story goes that on this expedition he found Yeti tracks and dung. He took moulds of the tracks, analysed the dung, but his biggest find was a hand and skull located in a monastery in Pangboche.
Peter examined the hand and skull but was unable to take samples. However he returned a few years later with a cunning plan that involved a bottle of scotch and a friendly monk.

While the monk was passed out with a tummy full of scotch, Peter cut a finger off from the original Yeti hand and replaced it with a human bone. The monks were non the wiser. Peter then crossed over to India where he gave the finger to Jimmy Stewart, the famous Hollywood actor, who smuggled it into England where it was analysed by a scientist.  Unfortunately the 1950s pre-dated DNA testing and thus opinion was divided as to whether or not it was a human bone or one from an unknown species.

In the late 1960s Sir Edmond Hillary and a team went to Nepal and concluded the hand in the monastry was a hoax. It is not known whether the team knew that the finger had been switched.

Unfortunately some time in the 1990's the hand and skull disappeared, and with it the small income the monastery made from donations to view them.

During my own travels to the region, visiting Lama Geshe and the Pangboche monastery, I had an idea to build a replica Yeti hand and skull to replace the lost artifacts. Something the monks could show travellers, generating discussion and intrigue and a little income once again for the monastery.


The inspiration for this website is to reach out to anyone who may have the original artifacts or has knowledge of their whereabouts. If they could find it in their hearts to return these original artifacts, the small village of Pangboche would be forever grateful. Lama Gershe had a stroke in September 2010 and is slowly recovering in Kathmandu.  I know he would be very happy if they were returned to their rightful home.

I can provide a service to collect or personally pick up the artifacts anywhere in the world with absolutely no questions asked. In fact, I'll buy the beers.

If you have them please find it in your heart to contact me and return them, good things happen to good people.